So this year for cheer there are tryouts. This is going to be my second year in cheer. I’m nervous and I hope all my friends and I make it. We are working hard to make the team. I hope everything goes well.

I hate being stuck at home I can’t do anything or go anywhere! All I do is eat, eat , eat all day long. I wish this never happened I miss school so much and my friends! I just want this all to be over! Hang in there everyone. 💖

They were not treated fairly. In the text, it stated that Sarah was beaten by her master’s wife. It said,’’His wife was a mean-spirited women who beat me for the smallest mistake.’’The article  stated,’’’ My clothes became ragged; my belly was never full.’’’ In paragraph 6 it stated,’’ I existed mostly on corn gruel, peas, and a little bread.’’ The text stated that many servants died from heat and diseases.

Some kids were kidnapped and forced into indentured servitude. Robert is one of the kids that got kidnapped. In paragraph 2 it said,’’’ The men said that children like me were a disgrace.’’ The text stated that If you work hard and serve us well We will treat you fairly. But if you are lazy or dishonest, or you try to run away, your life will not be easy. They worked long hours.  In paragraph 5 it stated, I worked from dawn to dark, planting and weeding tobacco.

However, ,some kids willingly signed up to go to America. In the article Sarha’s family was poor. Her family lived in London.  A man offered her a chance to go to America. In the text it said that She was 14 years old when she started working. The article said that she worked in a house. A few years later she became free.  She signed papers and started a new life. She married an indentured. Now they have their own farm near Jamestown. 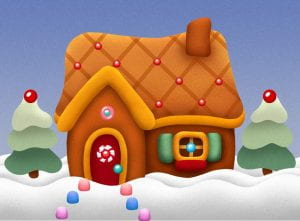 My family and I decorated our house every Christmas. We put a lot of effort to make it look nice.  All my family lives here with me. We love Christmas so much we always have so much fun decorating. We take off the decorations after New Year’s Eve. We sometimes just decorate the inside. We get a lot of presents on Christmas day.🎁 We spend Christmas at my aunt’s house or my grandma’s house. We love our gingerbread house so much we sometimes try to eat it!🎄 Our house tastes like candy and it’s really sweet. I can’t wait until next year to do this all over again😁 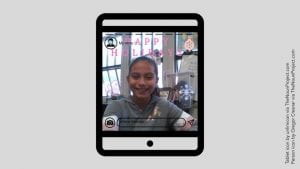 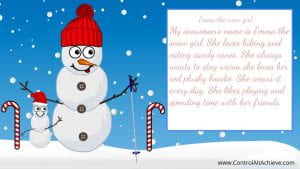 My snowman’s name is Emma the snowgirl. She loves hiking and eating candy canes. She always likes to stay warm. She loves her red plushy hoodie. She wears it every day. She likes playing and spending time with her friends.

My life is very fun and busy. I started cheerleading this year.  Either way, I just started it this year I love it.  It keeps you active and it’s a fun exercise for your body.  It’s so much fun because we dance and I get to hang out with my friends all the time. We perform a dance in every game at half time. A few weeks ago we made it to a competition we were so excited! If we Made it we would go to Las Vagas.  When we were performing the song cut off and we still kept ongoing. When we were finished we sat back down at our seats. When the last group went it was time to say what teams made it to Las Vagas and also who was 1st, 2nd, 3rd. There are 3 different types of groups in our team. The biggest group was the midgets and the middle group was us the peewees. The smallest group was the Jr peewees. Then it was time to say who goes to Vagas. Everyone in the team was holding hands our hearts were pounding! After they announced who was 3rd place it was the midgets. After they were going to announce 2 place but it was another team.  Finally, they announced 1st place witch was Jr peewee.  They were all cheering but we weren’t. We didn’t make it to  Vagas.  After we went outside we were all sad and some of my teammates were crying. 2 weeks later they said we were having a pizza party to say goodbye to everyone. Once everyone was there they said we did a good job at the competition. Then they had an envelope and we were curious to know what was in it?  They finally told us what was in it. We couldn’t believe what it was!! it was an invitation to go to Las Vagas. We were cheering and we were so happy!  Everyone was so excited to go.  So we are going to Las Vagas!!

Welcome to your brand new blog at Edublogs!

To get started, simply visit your blog’s dashboard, edit or delete this post and check out all the other options available to you.

We can walk you through step-by-step in our guide to getting started with your blog.